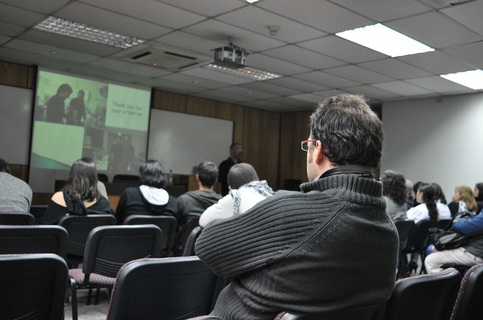 Lecture on phage therapy in INTA, Universidad de Chile given by the coordinator of the project
During the lifespan of the project we have realized a very intense staff exchange program that included secondments of 34 scientists (16 experience researchers and 18 early stage researchers) for a total 113.5 person-months. Scientists from European Institutes have visited the two Research Organizations located in the third countries, Eliava Institute of Bacteriophages, Virology and Microbiology in Tbilisi Georgia and the Instituto de Tecnologia de Los Alimentos of the University of Chile in Santiago, Chile. At the same period researchers from these Institutes have visited the European Organizations located in Greece (Hellenic Centre for Marine Research), Denmark, (Marine Laborarory, Copenhagen University) and Ireland (Trinity College Dublin). Through these visits we are exchanging technology, know-how and experience towards the final goals of the project.

We have isolated more than 50 new lytic phages for the target pathogens that are currently being characterized. The phages were isolated from Aquaculture facilities in Greece, Denmark and Chile but also a few from the Black Sea in Georgia. We have assayed the host range of the Vibriophages against more than 60 Vibrio isolates, also studied the virion morphology and phage DNA restriction profiles of majority of phages and based on these characteristics we have selected the most potent candidates for phage therapy to create a very strong phage cocktail. We have performed a large-scale trial to assess the effect of Vibriophages on the Vibrios community at HCMR’s fish hatchery that has shown that phages can result in significant decrease of the bacterial load in the larval rearing tanks and has helped us standardize the methodology of phage application for futures studies. Genomic analysis of Vibrio phages and purification and characterization of their lytic enzymes is in progress at the Hellenic Centre for Marine Research, at the Agricultural University of Athens and at Copenhagen University. Several phages have and their corresponding hosts have been already fully sequenced providing us tools for comprehensive insights to their life style, biology and resistant development. The diversity and distribution of phages against Flavobacterium psychrophilum is being studied with the collaboration of Danish and Chilean researchers. Sampling for phage isolation in Chile using a compilation of 10 Danish and 10 Chilean bacterial strains as hosts resulted in a new and systematic approach to characterize geographical patterns in phage communities. Further, researchers from both teams have proceeded in genomic characterization of phage-resistant F. psychrophilum based on full genome sequencing in order to relate for the first time to relate genetic mutations to resistant properties. Phage therapy trials have been performed in Chile with the collaboration of Chilean and Greek researchers. Salmon juveniles infected with Vibrio anguillarum were treated successfully (protection level reaching 100%) with Vibrio phages isolated by the Chilean researchers. New techniques using fish cell lines instead of live fish have been tested by the Greek and Chilean researchers in order to implement the 3Rs policy which calls for replacing laboratory animals when possible. Georgian researchers have visited Trinity College in Dublin and together with the Irish researchers have tested successfully molecular and biochemical techniques established and developed in zebrafish model in order to assess the health status of sea bream larvae treated with phages. Phage lytic enzymes have been studied at the Agricultural University of Athens with the collaboration of the Georgian research team. Phage lytic enzymes have been isolated and partially characterized. The interest of the biotechnological applications of the isolated phages is extremely high focusing mainly in the discovery of novel enzymes, work which have been supported with the genomic analysis done in several of the phages that have been isolated in the course of the project. 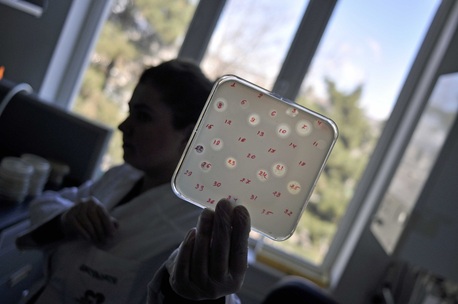 Host range of phages performed by Greek and Georgian researchers in Eliava IBMV, Georgia
AQUAPHAGE project was very fruitful in scientific production; 12 peer review articles have been published in international scientific journal, 6 more articles are being prepared or have been submitted, 16 presentations have been made in national and international conferences, 10 lectures/talks have been given at various Universities/Research Centers and 21 seminars/talks have been given within the 3 workshops organized by the project. Further to this 1 PhD thesis and 1 MSc thesis related to the project has been successfully submitted and 3 more PhDs are in progress and have been benefitted from the project. 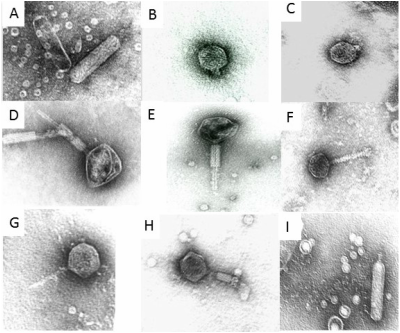 Phages against Vibrios (TEM pictures taken in Eliava IBMV)
The European Institutes have been benefited from the AQUAPHAGE project not only by the transfer of knowledge and experience but also by the formation of long-lasting collaboration with the participants. Many new proposals which were based on this network have been submitted for funding and HCMR and Copenhagen University are already implicated in 2 new research projects which are related to phage therapy in aquaculture, FISHPHAGE and PROAQUA, Greek and Danish National projects respectively. Further, we have established collaboration with Chilean researchers who have been hired as post-doc researchers in the European Institutes following the completion of their Marie Curie Fellowships in AQUAPHAGE project and we have enforced the collaboration bonds with Eliava Institute of Bacteriophages, Microbiology and Virology which is the most famous Research Centre for Phage therapy in the world. AQUAPHAGE project has mobilized researchers between Eastern and Western Europe which has resulted not only in transfer of knowledge but also to enhanced scientific communication and integration of research teams in a very promising research network for Europe. Successful implementation of the research goals of the project will have direct impact to the Aquaculture industry, consumers and to the environment through the reduction of antibiotic use.